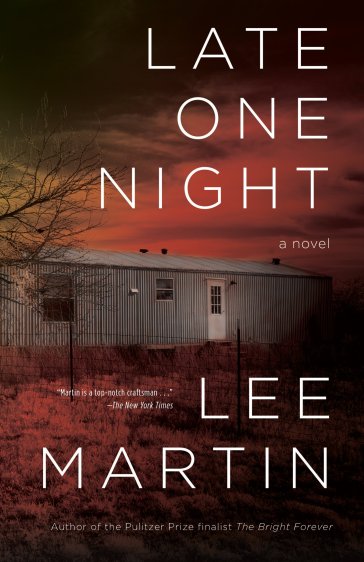 Lee Martin’s LATE ONE NIGHT is one of those books that stays with you long after you read the final page. In it, Ronnie Black’s estranged wife, Della, and three of his seven children are killed when their trailer catches fire on a cold Illinois night. The inhabitants of Della and Ronnie’s hometown of Goldengate have already been talking about the pair for the past several months. After all, Ronnie left Della with their kids and moved in with a younger woman—plus he wasn’t a person who inspired many to defend him even before that.

LATE ONE NIGHT is a wonderful study of a small town. Martin’s characters and dialogue bring Goldengate, Illinois to life, and every reader will find someone they know in its pages. I loved the way each person was made more real in some small way to help me further immerse myself in the story, and by the end of the book I felt as much a member of the town as anyone I read about. Shifting points of view ensured that I always had any needed backstory, and it was done in a way that didn’t leave me scrambling to remember whose brain I was sharing.

Lee Martin has a special gift when it comes to writing literary fiction. He combines suspense and the darker side of people with the comforting rhythm of a small town, and this book is a terrific example of that; Martin captures the wistfulness and yearning for what could have been, the hopes that come with a fresh start, and the suffering caused by a tragedy. It’s one of those rare books that I’ll read again, and I definitely recommend it to others.

View all posts by Kristie