AGE OF MYTH is the first book in The Legends of the First Empire, a new series by Michael J. Sullivan. It begins with an excerpt from “The Book of Brin” which sets the story in a land populated by Rhunes (men), and references the gods who live across the river from Rhuneland. Those gods are called Fhrey, and the first chapter describes the death of one of the supposedly immortal Fhrey at the hands of a Rhune named Raithe, who has a bit of help from Malcolm, a Fhrey slave.

In many ways, AGE OF MYTH is your standard epic fantasy. The Fhrey are a very powerful and long-lived race reminiscent of elves in other tales, and some of those Fhrey have learned to harness magic which has led them to view themselves as far superior to everyone else. The news of Raithe killing one of their own reaches Lothian, the fane (leader) of the Fhrey, and that news coincides with information that a member of the Fhrey warrior class has decided to desert his station and take others with him. Thus, Lothian is forced to address both threats, and Arion—one of the magic-wielders—is sent to deal with the problem. Arion heads to Dahl Rehn where the deserter and Raithe have both ended up. Dahl Rehn is a village populated by some great female characters. Persephone is married to the leader of the village and she is his most trusted adviser; Suri is a young mystic who lives in the forest but has ventured to Dahl Rehn with a warning of trouble to come; and Brin is the author of “The Book of Brin”—excerpts from which are found at the beginning of each chapter.

AGE OF MYTH is a tightly written story with action, adventure, wit, and compelling characters. Although the story itself isn’t all that different than others in the genre, the writing, strong women, and flashes of subtle humor help the book shine a little brighter than the standard fantasy offering.

As I noted, I was quite pleased with the power of the female characters in the book. Arion, Persephone, and Suri are obviously stars of AGE OF MYTH, and other women like Tura and Fenelyus provide a strong historical backbone of the story. Many of the males from all the races depicted are despicable and conniving creatures, but Raithe and his sidekick Malcolm are witty, brave, honorable, and fun, and I found myself looking forward to the sections of the book where those two contributed to the action.

The world in which all of these great characters reside is well constructed, and I’m sure that’s owed in part to the fact that AGE OF MYTH is set in the same location as some of Sullivan’s other books.

Another positive to the book is the ending. Some authors struggle to put together an ending that both satisfies and tantalizes when writing a series, but Michael J. Sullivan does it when bringing AGE OF MYTH to a close. I’ve recommended this book and Sullivan’s writing to many, and I look forward to reading more by him.

My thanks to the publisher for a copy of the book in exchange for my honest review. 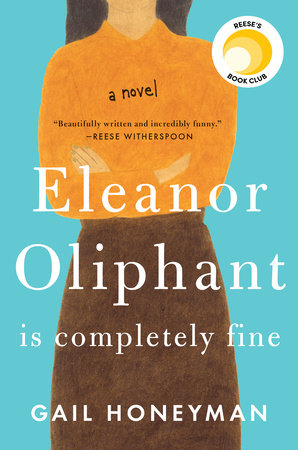 Eleanor Oliphant is not completely fine; that is clear from the start. But she is survivor, whether she knows it or not. This book is Chris Bohjalian’s disturbing The Double Bind mashed up with Graeme Simsion’s charming The Rosie Project, with fascinating, heartwarming, and surprising results.

Twenty-nine-year-old Eleanor has worked in an office job for eight years. From Monday through Friday she has her head down at work, unable to figure out how to interact positively with her co-workers. Every night, she goes home to her apartment, has a solitary dinner, and goes to bed. She drinks her way through the weekend, alone, just to get from Friday to Monday. Every Wednesday evening, she speaks with her “Mummy,” a terrifying maternal figure. As the book progresses, we find that Eleanor has had a challenging upbringing that featured abuse and trauma, but the biggest problem she faces is an inability to recognize “normal.”

The first few chapters of the book describe Eleanor’s loneliness in painful detail, but for the reader, the ache is tempered by the laugh-out-loud observations Eleanor makes along the way. Her point of view is definitely unique, but it rings true in the context of what, over time, we find her life experience to have been.

Eleanor’s lonely existence starts to evolve when she develops a crush on a singer in a band. She essentially goes through her teenage years a decade late as she deals with these new feelings. The crush leads to a clumsy attempt to improve herself. At the same time, she begins inadvertently to form friendships with Raymond, the new guy at work, as well as the elderly Sammy and his family. Before she knows it, she has something resembling a social life—and the emotions that she has suppressed her whole life begin to demand her attention.

By page 18, I thought I knew exactly what was going to happen with this book. By page 28, I had revised my assessment somewhat. By page 74, I had surrendered myself to the charm and unexpectedness of the story, rooting for the unconventional heroine and the sweet characters who model normal behavior for her and ultimately help Eleanor to reclaim her own voice. 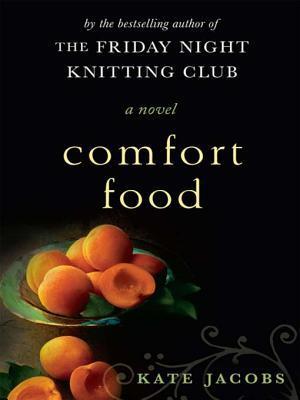 In food terms, Comfort Food is macaroni and cheese, with a little bacon thrown in. In other words, it’s basic fare with just a little something extra–a great choice for the beach or a plane trip, and unlikely to upset your stomach.

The heroine, Gus Simpson, is a 50-ish Martha Stewart type with two feisty daughters, a neighbor who is reclusive for good reason, serious control issues, and a television cooking show that is unexpectedly on the rocks. Gus is forced by circumstances to take some risks, pulling a motley assortment of reluctant friends and family along with her as she tries to revive her sinking career (not to mention her pathetic personal life). The results are extremely contrived, but surprisingly entertaining.

Gus starts out a little too strident, but the many (maybe too many?) odd characters surrounding her soften the edges. Like the author’s hugely popular The Friday Night Knitting Club, this book touches just enough on themes of commitment, loss, friendship, and family to keep the book group talking. But there’s no need for deep thought—with this book, just sit back and enjoy the action, the unusual characters, and a couple of twists at the end.

One warning, though: As you read Comfort Food, keep a pile of snacks handy, because the food descriptions will have you salivating.

Jane Yolen’s collection THE EMERALD CIRCUS is pure delight for anyone who craves inspired retellings of classics from literature, or re-imaginings of the lives of real literary figures. Yolen takes a slanted look at the lives of Emily Dickinson, Hans Christian Andersen, and Edgar Allen Poe, and she creates some stellar “what if” moments for Lancelot, Dorothy (from Oz), Alice (from Wonderland), and others. Yolen’s writing is beautiful, her pacing is perfect, and the way she takes stories that have been done over and over again in a whole new direction is sublime. My favorite part of the collection (if I have to choose just one) is her take on Peter Pan and Wendy’s story in which Peter and the Lost Boys are pretty contemptible, and the girls of Neverland exist only to serve them until … well, you should read it and find out.

It’s rare to find a short story collection that doesn’t contain at least one “meh” story, but THE EMERALD CIRCUS nails it.

Okay, Skippy dies. That’s no surprise; it happens in the first few pages of the book, on the floor of a Dublin doughnut shop frequented by acne-ridden adolescents from the boys’ school up the road. The surprise lies in how fervently I hoped throughout the rest of the book that that scene somehow didn’t happen, that it was all a hoax, that Skippy was in fact alive and well and off somewhere getting his life together.

From the first chapter, Paul Murray shifts through time with assurance, showing how sweet, sensitive Skippy’s death affects those around him while also revealing, slowly, how he came to be sprawled on the floor of the doughnut shop with his friend Ruprecht looking on in the first place.

The adults in the book are hugely disappointing–indeed, the complete ineptitude displayed by Skippy’s teachers and parents is one of the weaknesses of the book. But the author draws upon Skippy’s friends for the story’s humor and wisdom: the observations about school and life are sharp and witty, and Skippy’s pal Dennis gives an interpretation of Robert Frost that still makes me laugh out loud.

Funny, tragic, and occasionally even uplifting, Skippy Dies is a roller-coaster ride through the good, the bad, and the ridiculous–i.e., adolescence–with a main character whose death serves, too late, to bring him to life.

KITCHENS OF THE GREAT MIDWEST by J. Ryan Stradal revolves around Eva Louise Thorvald, the only child from the brief marriage of a chef and a sommelier. The reader meets Eva as an infant, follows up with her as a preteen, catches a glimpse of her during her teen years, and then finishes their relationship with her as Eva settles into her 20s. Stradal tells Eva’s story in a manner reminiscent of a short story collection, and with each chapter she is viewed largely through the eyes of people whose lives she touches as she navigates the world. As one would expect from a character with a “once-in-a-generation palate,” Eva’s interactions with others are largely food-focused, and the author happily includes a few recipes for those inclined to try out the food that sounds so delicious on the page.

KITCHENS is a beautifully written bit of fiction that manages to make the reader pause and think about the meaning of family, the importance of community and friends, and the role food plays in our lives. It somehow does all of that without being overbearing and stuffy. For a time I wanted the entire book to be completely from Eva’s perspective, but I think something would have been lost if the author had gone that route. Twenty-something-Eva is a mysterious and elusive character, and the author’s method added to that. As I finished KITCHENS, I was left wanting more of Eva and her food–much like the characters in the book.

In his study of three extremely complex characters, Robert Goolrick creates a compelling meditation on love, greed, addiction, passion, death, forgiveness, beauty, wealth, madness, and redemption, set in wintry Wisconsin in the early 1900s. The author does not over-describe, instead leaving the reader to fill in the blanks about the characters’ past and present lives.

Each character has a clear desire, but not everyone in this story can get what he or she wants, and much of the book’s suspense is created as the competing plans unfold. The characters undergo tremendous internal changes over the course of several months, changes that are largely (but perhaps not entirely) believable. Still, there are a few aspects of the plot that are a little too coincidental to be comfortable, and one main character seems a little too good to be true.

This is an engaging book that will leave you thinking about the meaning of parenthood, the rewards of forgiveness, and the nature of love.